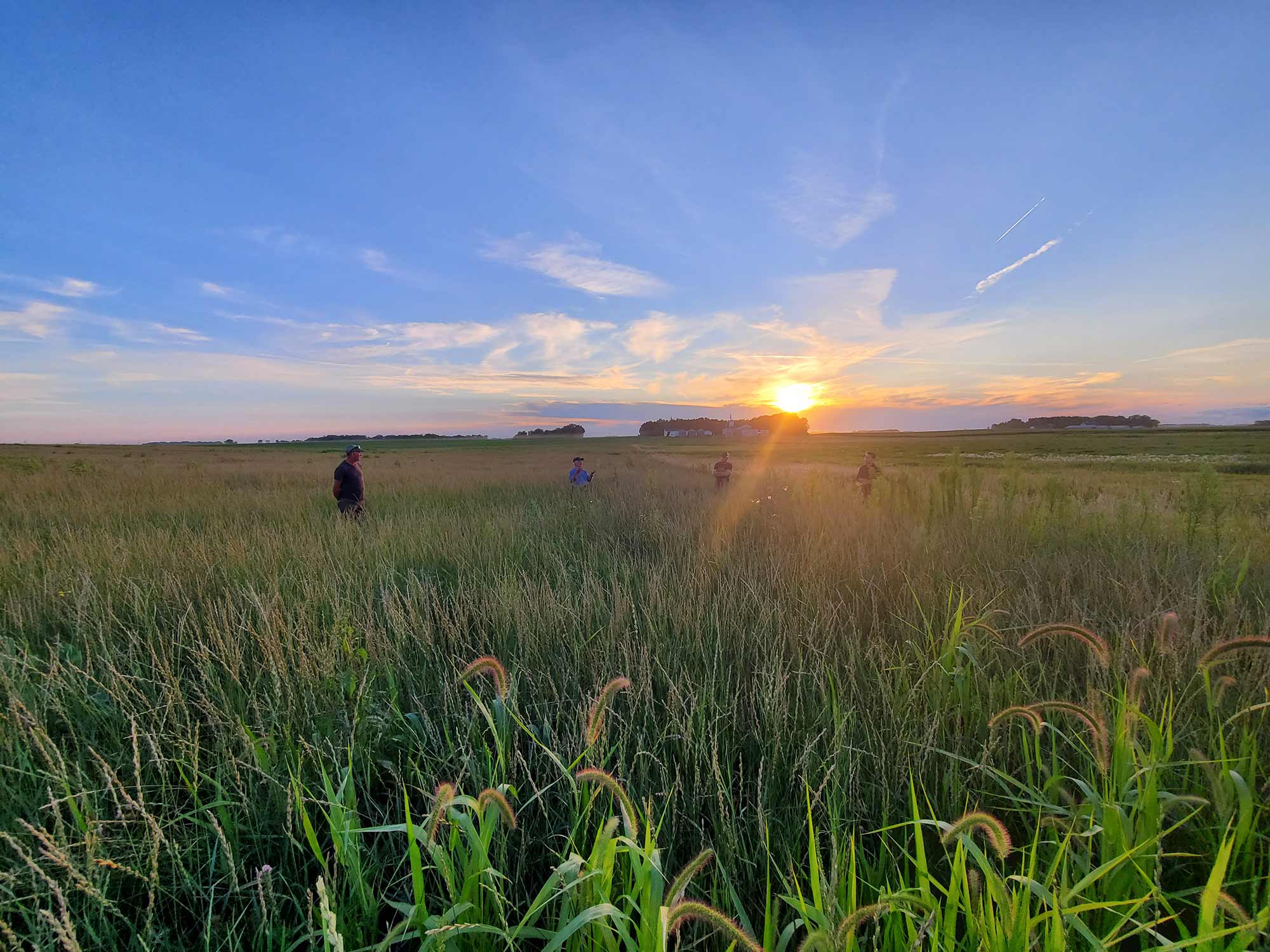 Coming Together for the Sake of a Creek Rice Creek is important for many reasons. Not the least of these is its status as the westernmost trout stream in Minnesota with a self-sustaining population of brook trout. For Mike Daly, Rice Creek has been a respite in daily life and a connection to his family’s 70-year heritage on the land. However, he has also seen the dark side of the creek as torrential rains washed out roads and the stream ran black with silt. More recently, it has taught him the value of a community coming together to protect and improve a valued natural resource.

“It is a tiny stream, insignificant to most people driving by, but not to me,” says Daly. “I have only a small piece of it flowing through my farm, but it is a great place to sit with the grandkids and watch the fish in the pools. We turned about 80 acres of highly erodible crop land into woods, native grass and ponds. It gets better every year, and it is all related to the creek.”

While neither a farmer nor a fisherman, Daly has kept a close eye on the stream through the years. “In the past, I would see bubbles in the stream that weren’t normal, but indicated nutrients and pesticide run-off from surrounding fields,” he says. “In recent years, I’m seeing improvements. There is more awareness of the environment, and conservation of the creek has definitely improved.” These improvements in habitat for fish and the invertebrates they feed on, as well as water quality, are being recognized by others as well. They led to designation of the creek and the larger Cannon River watershed as one of the Nation’s 10 Waters to Watch for 2021 by the National Fish Habitat Partnership. The list, assembled by the nation’s leading authorities on aquatic conservation, recognized the combined actions of concerned community groups, non-profit organizations, local watershed groups, Native American tribes and state and federal agencies.

Al Kraus, conservation program manager, Clean River Partners (CRP), gives local farmers credit for making changes in how they farm. He points out that 3,500 of the 4,100 acres in the Rice Creek watershed are tillable. Field-linked conservation practices are key to protecting and improving the stream. Without CRP, those changes would have occurred more slowly. In 2017, the local environmental nonprofit based in nearby Northfield brought together a coalition of county, state and federal agencies and donors, such as Fishers & Farmers Partnership for the Upper Mississippi River Basin, Trout Unlimited and more, to protect and improve the creek and its watershed. In doing so, they built on an earlier effort.

“The community came together to look at flood prevention and trout stream protection after a major flooding event in 2012,” explains Kraus. “The Rice Creek Assessment was sponsored by Bridgewater Township and funded by the Minnesota Pollution Control Agency, Rice County Soil and Water Conservation District and a group called the Rice Creek Concerned Citizens Group. They identified a number of objectives, some of which were carried out. Promoting cover crops and no-till was one we decided to focus on.”

CRP set a goal of converting a third of tillable acres to cover crops in three years, with a plan to provide feedback to local farmers regarding benefits. Farmers who were already planting cover crops, such as Daly’s long-term renter, and some new to the practice were contacted and encouraged to get involved. Students from nearby St. Olaf College began gathering water samples from field drainage tiles and stream locations. Selected drain tiles were from both conventionally tilled fields without cover crops and no-till fields with cover crops. The Minnesota Department of Natural Resources (DNR) collected water temperatures and other data.

“Donors like Fishers & Farmers paid farmers to try new practices, helped cover our staff time and sponsored a field day in 2019 to share results,” says Kraus. “Cover Crops, Tillage and Trout and How They Connect helped area landowners gain a better understanding of their impact on the creek.” Demonstrations of water infiltration and how streams can be affected by changing vegetation, as well as in-stream participation with fisheries personnel shocking the creek, were educational. However, a key element was a panel of farmer participants in the project talking about their practices and why they were important. The field day had an impact, as has other CRP efforts.

Data, including costs, impact on crop yields and fertilizer savings, continues to be gathered. Kraus shares the data with Rice Creek farmers in annual meetings and information spreadsheets. “In 2018 we had 750 acres enrolled in the project,” says Kraus. “That increased to 850 acres in 2019 and 1,040 in 2020. Average nitrate levels in the stream below the tile outlets dropped from 16 parts per million in 2017 to only 8 parts in 2020, years in which we had some large rain events.”

Craig Soupir, area fisheries supervisor, Minnesota DNR, has seen the impact of the project firsthand. “Getting people to understand the role of cover crops is vital,” he says. “In the long term, changes to land use will have a big impact, first in water quality and at the bottom of the food chain in more and diverse invertebrates. The positive impact on fish typically takes more time, but hinges on stabilizing and improving the overall habitat in the stream. Obviously, the Rice Creek Project has engaged the people that can make a difference, in this case private landowners, and that is a critical step.” A change in farming methods is improving conditions for brook trout in Rice Creek.

Daly points to changes made early on in his own fields by his renter, including reducing tillage and planting of cover crops, changes that are now being emulated up and down stream. He is a firsthand observer of their impact.

“Half the farm drains through my yard, while the other half flows through drainage tile and into the creek,” he says. “The quality of the water running off the fields is totally different from what it used to be. It is a smaller amount and much cleaner. Both up stream and down, I’m seeing improvements in soil management.”